Are you a customer of PFGBest? The CCC is working with regulators and monitoring the court on behalf of PFG customers. At this stage, we are advising customers to gather their statements and prepare for a claims or account transfer process.

The CCC will host a conference call to discuss these issues on Friday December 12, 2014 at 4 PM CDT.

Bankruptcy Update - Interim Distribution with 100% recovery for 30.7 customers, State of the Estate & Outlook
Just in time for Christmas, the PFGBest Trustee entered a motion for an interim distribution to PFGBest customers.   A hearing on the motion is set for this Thursday and opposition is unlikely. This distribution is limited to futures customers and would add to recoveries for those account classes as follows:

The motion adds 15% to 30.7 customers’ recovery and 7% to 4d customers recovery, bringing their total recoveries to 100% and 44% respectively.  The Trustee would still retain assets in excess of $50 million which could be used for future distributions, but is reserved pending the outcome of litigation, the resolution of the claims process and determination on creditor priority.

The Trustee also issued an interim status report which details the accounts and balances attributable to various customer classes prior to making the above interim distribution. 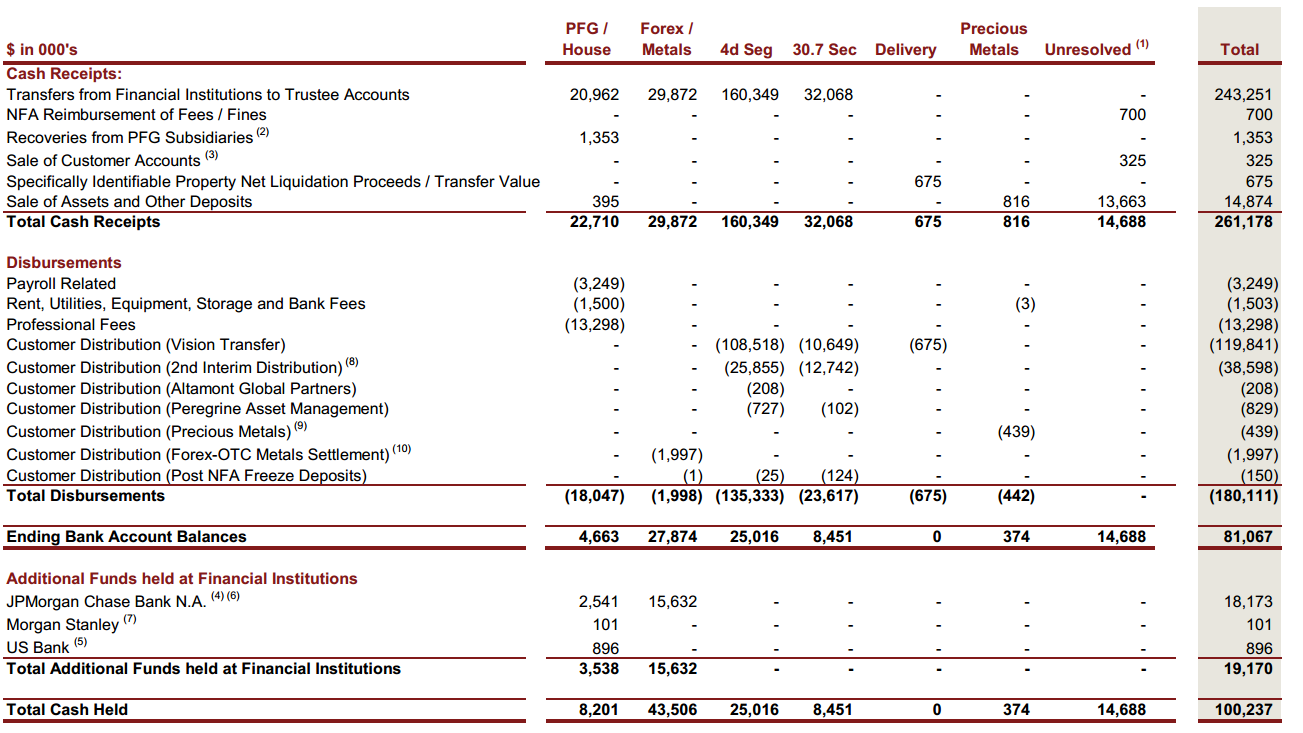 After this distribution, the 30.7 balance would be zero, with the 4d balance very close to zero.  This leaves the forex/metals cash and the settlement obtained from JPMorgan with respect to forex accounts unallocated.  The distribution of this balance is awaiting the resolution of several major disputes, as the Trustee is likely to reserve this property in its entirety until these are resolved:

CFTC v. US. Bank is scheduled for trial in January 2015

As you are most likely aware, the CFTC brought a civil case against PFG customer fund custodians US Bank and JPMorgan, seeking disgorgement and restitution to customers in full.   This case is set to go to a jury trial in January of 2015.  PFG customers received a spot of good news when, on November 19, 2014, the Court granted part of the CFTC’s Motion for Summary Judgment which prevents U.S. Bank from pursuing the affirmative defense of “unclean hands”. However, the court denied the CFTC’s Motion with respect to its other arguments. For example, the court granted U.S. Bank’s Motion for Summary Judgment to the extent it argues that U.S. Bank did not improperly use the customer funds when issuing loans.  Ultimately, a jury will decide whether or not US Bank had knowledge Wasendorf was breaching his fiduciary duty to customers. This case remains the best chance for customers to reclaim property beyond what the Trustee has been able to recover.

JPMorgan reached a settlement of $15.3 million in March 2014 with the Trustee, which will remove it from the class action.  Discovery in the case is ongoing and a trial date has not been set.  At this time, no further update is available.

The additional class action, pursued by IBs, was also allowed to proceed in September by Judge Ellis with respect to IB security deposits. She denied the lead plaintiff's claims concerning unpaid commissions, noting that commissions are not subject to customer fund protections. However, security deposits held on behalf of IBs by Peregrine might be subject to those protections.  This case is also in the discovery phase and no trial date has been set.

Over the course of the next two months, the CCC will be revamping its website to better track these and all cases involving FCM fraud.  Stay tuned for updates.

Given the recent development regarding a distribution, the claims market is in the process of adjusting bids.  We will provide an update as to pricing on the conference call.

The MF Global, Inc. Trustee has begun paying $551 million in distributions to general creditors who have made allowable claims against the MFGI estate.

Similarly, the MFGI Trustee anticipates being able to make further substantial distributions to general creditors as claims are resolved and further assets become available for distribution. Read more about the liquidation proceeding and get liquidation news at the following link:  Office of the Trustee for the MF Global Bankruptcy

Corzine lost his motion to dismiss this case back in January 2014, as a federal judge ruled that the CFTC’s complaint included reasonable allegations that Corzine failed to supervise employees.  The case was consolidated with the customer class action and is in the discovery phase.  No trial date has been set.

The customer class action suit was pared back in February, as Judge Marrero dismissed 6 counts against Corzine et al including allegations of mismanagement, direct violations of commodities law and breach of fiduciary duty.  6 counts were allowed to proceed however, as the judge found that MF Global officers and directors knew of their liquidity crisis and its impact on customer property.  Those counts include aiding and abetting violations of commodities laws and breach of fiduciary duty.

The case is in discovery and no trial date has been set.

MF Global Holdings has agreed to to settle a class action lawsuit from customers who accused MF Global of manipulating platinum and palladium prices between 2006 and 2010.  MFGH will pay $21.1 million in allowed claims to these customers.

The CCC has worked with Members of both houses of Congress over the last three years to strengthen customer protections via legislation.  We have informed and engaged Members and committee staff on a variety of mechanisms to strengthen investor protections, but the focus of our efforts was to reestablish congressional intent that commodity customers have a first priority right to funds purloined from segregation. In working with other industry organizations, the CCC fought to codify this principal in new legislation.  The Commodity Exchange Act requires that the CFTC be reauthorized every 5 years, presenting a legislative opportunity to pass such a measure in an otherwise difficult Congress.

The bill, known as the Consumer Protection and End User Relief Act H.R.4413, passed the House on June 24, 2014. Among other things, the bill gives the CFTC the statutory authority it lacked to define what property constitutes customer funds.  Should a shortfall in segregation occur, the CFTC would have the authority it needs to define assets of the broker as customer funds until the deficit in customer property is satisfied.  This is an important step in bolstering the legal framework which protects customer property and could help speed the return of customer funds in future insolvency proceedings.

The bill is waiting on the Senate to take it up in the next Congress, due to be sworn-in this coming January.  The CCC remains committed to lobbying for its passage.  Read more about the Bill at the following link  The Consumer Protection and End User Relief Act

At the request of the Managed Funds Association, the CCC worked with a coalition of six associations to voice opposition to changes in early termination rights for end users in over-the-counter transactions.  Essentially, foreign prudential regulators are seeking to do an end run on buy-side bankruptcy protections by amending the ISDA Master Services Agreement, the industry standard agreement governing swap transactions.  Under the changes sought, if a ‘globally systemic financial institution’ or one of its entities enter into ‘resolution’ or insolvency in any jurisdiction,  end users would not be able to terminate their agreements.  The idea is to create more stability during liquidity crises, but the upshot for customers is they give up bankruptcy protections afforded them by US courts.

The CCC co-signed a letter of opposition to the Financial Stability Board, the international board which is seeking to amend the ISDA agreement.  The letter stated:

“The Associations believe that it is contrary to public policy, in particular the goals of reducing systemic risk and protecting the financial system, to alter the termination rights provided under the U.S. Bankruptcy Code,” the association letter read. “The Associations urge the FSB to reconsider imposing the contemplated suspensions of early termination rights during insolvency proceedings under the U.S. Bankruptcy Code.”

Please read the press release and the full text of the letter for more information.  The CCC remains opposed to the changes and will continue to work with industry groups to strengthen protections for customer property encumbered in derivative transactions.

We Need Your Donations

Please remember the work done by the CCC is made possible by your membership and donations.  Please become a member of the CCC to support our mission and please consider making a donation.

We look forward to hearing from you on the call.  Happy holidays everyone!

The Commodity Customer Coalition, Inc. Board of Directors

THIS POST IS FOR INFORMATIONAL PURPOSES ONLY AND DOES NOT CONSTITUTE LEGAL ADVICE.

Although the information above is presented in good faith and believed to be correct, it is general in nature and is not intended as legal advice. The information below may not be applicable to or suitable for an individual’s specific circumstances and may require consideration of other matters.  We recommend that you consult a lawyer to ensure that our information and your interpretation of it is appropriate for your particular situation.

Get the latest news on #MFGlboal.

About John Roe 86 Articles
Co-Founder of the CCC and head of BTR Trading and Roe Capital Management.